Progress seems to have slowed a bit over the last couple of days despite me actively working on the car pretty solidly. In part this was down to waiting on a couple of missing parts to arrive from Caterham which turned up today (thanks Derek) but also because I've had to spend a fair while on the forums seeking some advice on how to complete the routing of the various pipes that make up the overall cooling/heating system. With everyone back at work (apart from me - ha ha), I've been the only 1 taking a vested interest in the car. well almost....

My main aim over the last 2 days has therefore been to finish off the cooling system but also do a few of the odd jobs that I'd not got round to doing in and around the engine bay.

I'd already got as far as fitting the top hose to the radiator which was very straightforward. Next it was on to the bottom radiator hose and the routing necessary to take it to where it connects to the head just behind the water pump. The rest of the hoses were far more confusing and its clear that the pipes supplied and what you need to do with them have changed quite significantly since the Assembly Guide was last published back in May 2012!!! (Edit - a recent owner currently sent me the lastest version dated Dec 2012 - it still doesnt have routing for this particular variant in it though) Rather than hash out all of the things that I found wrong with the guide, here is a general summary of the main things you need to bare in mind. Look at the guidance in tandem with the diagram I've now put together of how it should all be routed and hopefully it will all start to make sense:


So on the advice of some kind forum members, here is how I have routed all of the pipes and wired it all up. Hopefully its right and the diagrams and photos help someone when the time comes for them to repeat this part of the build: 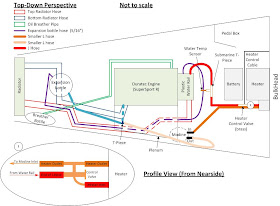 I then moved onto connecting up the throttle linkage to the accelerator pedal. Nothing very complicated about how it goes together and the manual is pretty clear at this point. Things I feel worthy of a mention though are:


I also went and completed a job that I'd not finished since the engine and gearbox had gone in. The propshaft was still hanging loose in the transmission tunnel so, having dug out the bolts, I started trying to fit and tighten them up from the top of transmission tunnel. I could do them up but trying to get the torque wrench on was a problem from here. In the end I went under the car and got a long extension bar out and managed to do it from there more easily. Remember to put the car in gear before you start to torque up the bolts else the propshaft will spin around on you!

I then went back to fit the oil breather bracket and bottle which arrived at lunch time today in the post. Managed to snap a drill bit whilst trying to drill some of the holes in the chassis but otherwise pretty plain sailing. I added some washers to the back of the bracket before riveting it in place so as it wouldn't foul the existing rivets that are already protruding from the car slightly. And this is how she looks this evening. Starting to look like a real car already. Tomorrow its on to the rear axle and the suspension. 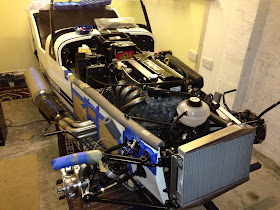